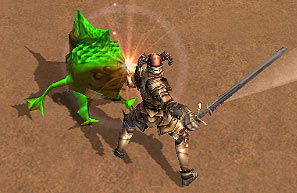 Return of Warrior (ROW) is a free-to-play MMO set in a mysterious land divided by creatures, sorcery, and territory. The RPG style PvP action in (ROW) gives player’s a fast paced real-time combat experience. Set in a virtual world at war players must select one of the two nations. Choose the Human race or Ak’Kan race and battle.

The 14 different classes are:

Monsters: All you need to knowEdit

There are lots of different monsters int he world of RoW. What with the vast range of the mina land and with the Pain Island and anything else there is. The entire list of monsters isn't on record anywhere, that I know of. And myself, being a level 20 Ak'Kan Gunner, has yet to see all of them. But, everytime I come across a new monster I will be sure to but it on the RoW Wiki so you can get better info on it!

RoW has plenty of things do. Almost as much as how many monsters there is to fight. Now if you've played RoW or RYL, then you should already be aware that the color of a monsters name means how difficult it would be for you to fight that monster.

Grey: 2 or more levels lower than you, these monsters are going to be easy for you to kill.

Green: These monsters are at your level. Taking on 2 or 3 at a time is no problem depending on your class.

Yellow: These monsters are a little stronger than you. Be carful when trying to take on several of them at once.

Orange: There monsters can kill you if your no carful! Avoid fighting for than one of them!

Red: Don't try it! Try fighting this monster after you level 2 or 3 times!

Heres a list of monsters (NOTE: In order of distance of power[weakest to strongest]this is also just my persuption. may not be accurate.)

You can earn up to 10 ability points by completing quests given by Ability Trainers in Tessetio and Unite. You can learn abilities by reading books, and they can be purchased with medals from Ability Trainers.

Unlike skill points, the ability points spent increase up to 3 points based on the level of ability you learn.

Retrieved from "https://row.fandom.com/wiki/Return_of_Warrior_Wiki?oldid=4059"
Community content is available under CC-BY-SA unless otherwise noted.